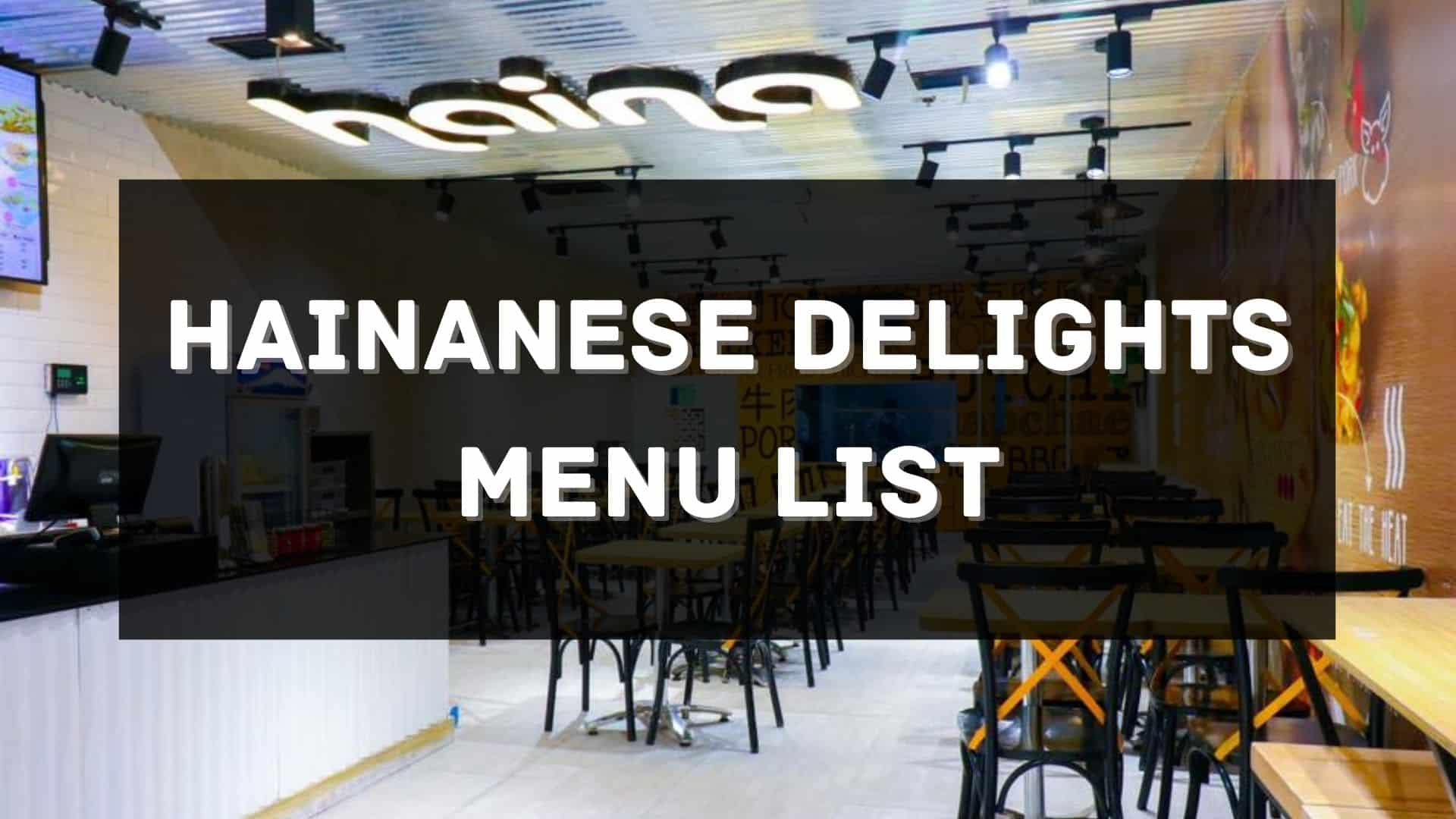 Hainanese Delights menu aims to introduce Singaporean food to the broader public, in this case, Filipino people in order to broaden the palate of the average Filipino. The major objective is to be able to create delectable foods that would not just spread throughout the Philippines but also dishes that would be embraced and loved by the public.

Hainanese Delights had a successful debut in 2011 at Robinsons Galleria thanks to their company’s expansion into Singaporean cuisine, which widened its gastronomic horizons! Having already promoted Chinese cuisine since late 2017, they now bring Singaporean cuisine to the Philippines as a part of their ongoing passion for Asian flavors.

Hainanese Delights – This menu is the best-selling tender and savory white chicken that is paired with Hainan rice, special chili garlic sauce, and ginger sauce.

Pork Passionate – This dish is breaded pork that is deep fried until it has a golden brown color. This dish is best paired with hainan steamed rice.

Porky Chops – Hainan’s pork chop barbecue. This Hainanese Delights menu is made up of thinly sliced pork pieces that have been marinated in a unique flavor and spice blend that was specially made by Hainanese Delights to make the pork juicy and tender.

Hainan – It is a Hainan special fried chicken. A tasty treat that is simple but delectable for customers of all ages. This dish is popular with both children and adults.

Whole Chicken Delights – This whole chicken dish can be steamed or fried depending on the customer’s preference. Diners can also opt for half a chicken if they want to.

Eat the Heat – Is based on a korean-style of cooking. Eat the Heat is a spicy fried squid that is dressed with green and red bell peppers that bring out the height of spiciness in this dish. This dish is very popular for those who want a little bit of spice in their meal.

Pure Pork – It is a pure pork dumpling that uses ground pork as its base. The ground pork from this Hainanese Delights menu is mixed with the spices and wrapped in a food wrapper before being deep fried until the texture becomes crisp and its color turns golden brown.

Kutchay Kraze – Pork and Kuchay dumplings. These dumplings are steamed, making them a wonderful light snack and appetizer that is both healthy and delicious! Pork and chives are the only main components of the dumpling’s filling.

Chicken Heaven – It is a BBQ chicken that is decorated with cucumbers and spinach and dipped in a specially made Hainanese sauce. This dish is then paired with hot steamed rice that will \surely make the diner full.

Hot Chick – Is almost the same dish as Chicken Heaven. The only difference is that Hot Chick is a spicy BBQ chicken that is ideal for all diners who want a spicy twist to their meals. This chicken barbecue is paired with steamed rice and will make a wonderful and fulfilling meal.

Bring in the Beef – This is a meal that is composed of beef brisket and steamed rice. The beef brisket is slowly cooked until it becomes really juicy and tender to provide diners with a wholesome experience with every bite.

A Bite of Both – A meal that is made up of shrimp and pork dumplings and is also paired with steamed rice is both delicious and filling. Customers can choose to steam or fry the dumplings depending on their preference.

Chapchae – This traditional Korean dish features soft sweet potato noodles that are cooked in soy sauce together with crunchy veggies and tender, juicy meat that is very filling. This dish is best consumed while it is still warm.

Laksa – This Hainanese Delights menu is a noodle dish that is very famous in the Southeast Asian region. Hainan laksa is made with thick rice noodles and is topped with chicken, prawns, or fish, depending on the customer’s preference.

Singapore Staple – Hainan chicken soup is considered one of Singapore’s staple meals. It is consumed everywhere in Singapore on a daily basis and is a common sight at hawker centers across the country. The chicken is frequently served with seasoned rice, chili sauce, and frequently garnished cucumbers.

Pork in a Bowl – A typical heart noodle that was made special because of the Hainan pork on top.

Family Meal A – This family meal is good for four people. It consists of one whole Hainan chicken which can be steamed or fried depending on the customer’s preference, pork and kutchay dumplings, and unlimited rice.

Family Meal B – This family meal is good for four people. It consists of one whole Hainan chicken which can be steamed or fried depending on the customer’s preference, 8 pcs of pork dumpling, tofu, mix veggies, and an unlimited rice

10 Plus 1 Bayanihan sa Haina – It is a meal that is good for many people and they can just choose 10 assorted rice meal and an added one rice meal for free!

Tender Beef – This dish is Beef Tendon Noodle, which is Chinese cuisine and is made up of dry egg noodles. Braised beef and tendon are put on top of the dry egg noodles with a few blanched greens.

Hainan Fish Fillet – This Hainanese Delights menu has a tausi that provides extra saltiness to the dish itself. This Asian-inspired dish lessens the fish’s odor while bringing out its marine flavor.

Take the Cake – This radish cake has a crunchy exterior and a soft interior that practically melts in the diner’s mouth, making their stomach grumble because of the richness of the dish’s umami. This dish is good for those who want to try a lighter meal or snack.

Do you have any concerns and want to contact the team of the Hainanese Philippines? In that case, you can contact them via their social media accounts. When you visit them, we also encourage you to start following them so you will not miss any important news that they will post. To browse their social media pages, refer to the following links:

Aside from being previously known as a Chinese restaurant, Hainanese Delights’ menu has now expanded to include Singaporean cuisine. This expansion has added a lot of new dishes and provided them with flexibility in their new menu. If you wanted to try different Asian cuisines, you would now know where to go.