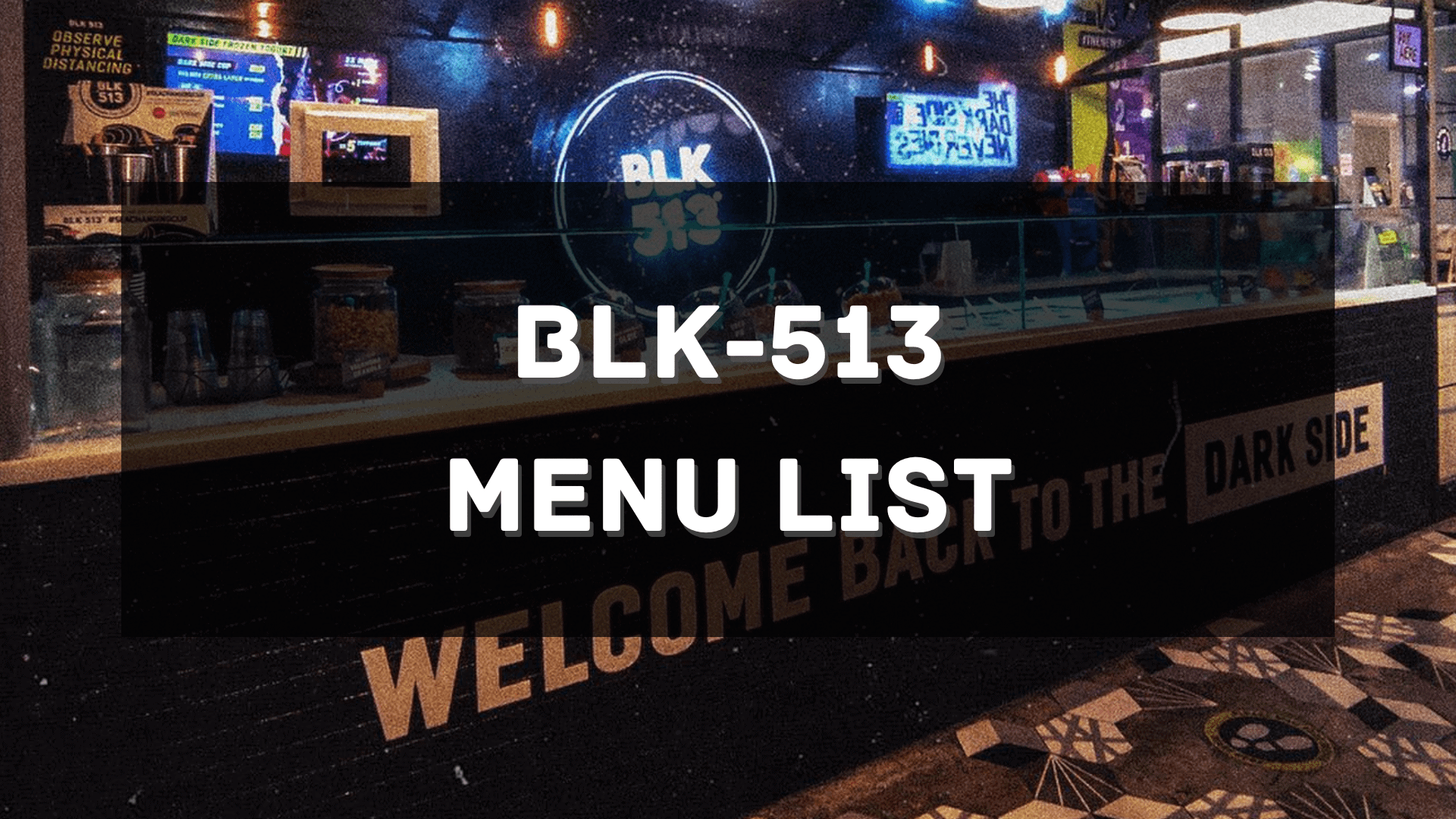 Desserts made with frozen yogurt are healthier since they contain less fat than ice cream and because yogurt helps with digestion. The BLK 513 menu is the first dessert shop in the nation to sell frozen yogurt that has been enriched with activated charcoal.

The frozen yogurt from BLK 513 is advertised as a novel way to lose weight without sacrificing flavor because it claims to have detoxifying properties in addition to a host of other health advantages. A frozen delight that only employs American ingredients is seen from a novel and unique angle. Premium Greek yogurt without gluten.

Below, you’ll find the updated list of BLK 513 menu prices.

Kim Sy and Abi Fernandez, who were childhood sweethearts and spent five years as OFWs in Singapore, had been preparing to launch their own company for a long time before they made the decision to return home. Sy, who was employed by a large fast-food corporation, wanted to get into the food industry but had no idea where to begin. Fernandez, who at the time worked in marketing for a fashion company, noticed that the market for healthier alternatives was already being expanded by the culinary trends.

The couple saw that no one had yet introduced something sweet with health benefits, despite rising demand for healthy food options, from juice cleanse diets to vegetarian cuisine. Thus, in 2015, the pair began to investigate the possibility of creating authentic frozen yogurt as a substitute healthy dessert item for the expanding health-conscious market. In their research, the couple found that adding an additional component called activated charcoal can enhance the quality of frozen yogurt.

The body can be relieved of undesired pollutants with the use of activated charcoal, previously thought to as a universal remedy. Additionally, it facilitates a number of advantages, such as decreasing cholesterol, teeth whitening, and hangover relief. The pair began their frozen yogurt business in SM Megamall right away and gave it the Singaporean address BLK 513 when they eventually came back to the Philippines a year later. Fortunately, the initial shop turned out to be a very profitable business, which inspired the pair to open other locations the next year.

Frozen Hot Chocolate – This BLK 513 menu is created with dark chocolate mousse, strawberries, malt cookies, and vegan brownies. The vegan lace biscuit and their Dark Valrhona sauce are even used to top it off with more chocolate.

Dark Velvet Chocomint – Dark chocolate typically has a gritty texture, is bitterer than milk chocolate, and is also less sweet. Although even sweet dark chocolate is not as sweet or silky as milk chocolate, these qualities are more noticeable the more cocoa there is in the chocolate.

Molten Lava Purpose Cup – a common treat that blends the flavors of a soufflé and a chocolate cake. The dessert’s liquid chocolate core is where its name comes from.

Honey Cereal Glow – Which has kiwi, strawberries, and golden corn flakes in a vibrant combination. Mango sauce is drizzled over it, and a honey pipette is placed on top.

Good Morning Love – This BLK 513 menu consists of sweet biscuits, gooey butter bars, coffee jelly, and strawberries, and is drizzled with a dark mocha sauce. It is straightforward and tasty.

Banoffee Pie – Which is stuffed full of bananas, caramelized cookies, and smooth panna cotta with peanut butter. It is exquisitely topped with chocolate-covered banana chips and drizzled with chocolate-banana sauce.

It’s created with natural ingredients and the best Greek yogurt. Because dark skim contains fewer calories, fat, and sugar than other delights, it is healthier and gluten-free. The most well-known and reliable detoxification substance in the world is activated charcoal. In addition to encouraging good eating and cleansing, activated charcoal also lowers cholesterol and has anti-aging benefits. can aid in the eradication of environmental pollutants and food-related contaminants. The first frozen yogurt with activated charcoal in the nation is called Dark Skim. It contains live probiotic cultures, which become active only after entering the body.

Your preferred green matcha flavor is present in large quantities in the Tropical Matcha. Try the Tropical Matcha from BLK 513, which contains layers of matcha pannacotta, mangos that have reached peak ripeness, and vegan matcha granola. Matcha sauce is used as a glaze, matcha powder is added as a garnish, and matcha tuille is placed on top.

The first dessert shop in the nation to sell frozen yogurt with activated charcoal enhancement is BLK 513. BLK 513 permanently altered the way that fans of Dark Skim consume frozen yogurt. This yogurt certainly provided happiness in a cup to people of all ages with its unique concept.

During a hangover, it would be very inconvenient to go to a BLK 513 store. With the headache that you have, it would probably be impossible to leave your bed. You need not worry for you can always order the best-frozen yogurt through the Grabfood or Foodpanda app.

The place is called BLK 513 because of a place in Singapore.

Kim Sy and his wife Abi Fernandez constitute the power couple behind BLK 513, alongside their partner, Mr. Freeze or Ice King Gerry Santos, who even provided a sweet message for them

To get in touch with the BLK 513 staff, you can send them your message via the following social media pages or website:

The BLK 513 menu has been present for more than a while, and even at closing time, lines are still out the door. The nicest part about eating something nutritious with a dash of the dark side is having your personalized cup made with care just for you. The frozen yogurt from BLK 513 is advertised as a novel way to lose weight without sacrificing flavor because it claims to have detoxifying properties in addition to a host of other health advantages. A frozen delight that only employs American ingredients is seen from a novel and unique angle. Premium Greek yogurt without gluten. Every order at BLK 513 takes some time to assemble since they do it layer by layer to ensure that you don’t run out of toppings in the middle.